‘One Last Deal’ examines how to go out on top

When we come into the home stretch of our lives, we hope to settle our accounts, make amends and, one would hope, make a splash while we still can. But that process may prove challenging, especially if we’re loaded down with baggage, have difficulty making changes and come up against unexpected obstacles. Can we persevere under those conditions? That’s the test put to an elderly businessman looking to wind up his affairs in the new Finnish drama, “One Last Deal” (“Tuntematon mestari”).

Aging, ailing Helsinki art dealer Olavi Launio (Heikki Nousiainen) is contemplating retirement but with a definite sense of regret. He’s never achieved the success that he had hoped to attain, mostly selling second-rate pieces from the estate sales of deceased widows with less sophisticated tastes. His cluttered, shabby-looking gallery is filled with unsold works, many of which receive only minimal interest from would-be buyers (and then only from those who are looking to bargain the prices down from what Olavi’s asking). What’s more, Olavi’s business practices are sorely out of date. In addition to having amassed a pile of debts, he’s behind the times in many ways: he keeps all his sales records manually, his client list consists of a ragtag collection of yellowing index cards and he doesn’t even own a computer, something that has caused him to lose out on a lot of sales to online customers. It’s obvious he’s a genuine art lover, but, given how he does business, is it any wonder that he’s barely staying afloat – and that he’s understandably discouraged by his track record? 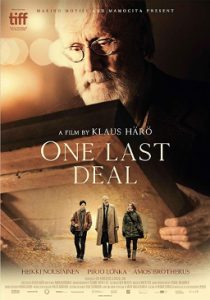 To make matters worse, the widower doesn’t have much of a personal life. He lives alone, and he has little contact with others, except for a fellow art dealer, Patu (Pertti Sveholm), who faces many of the same business challenges. Olavi’s only family members, his daughter, Lea (Pirjo Lonka), and his sometimes-troublesome teenage grandson, Otto (Amos Brotherus), have little contact with him, mainly because of a lack of support over the years, including during some especially tough times in their lives. He even seems reluctant to help out Lea when she asks him to give Otto an internship to help him fulfill his school’s mandatory job training requirements, a request to which he eventually begrudgingly relents. Indeed, Olavi really is a loner who seems to enjoy his solitude while ironically abhorring it at the same time.

What Olavi wants most at this point in his life is an opportunity for one last big score, one that he believes will help him vindicate his past and allow him to go out on top. And, interestingly enough, just such an opportunity arises when he visits a nearby auction house. While perusing a collection that’s being prepared for auction, Olavi comes upon a portrait of what he believes to be a peasant, a radiant rendering that positively captivates him. However, when he tries to find out more about it, there’s little information available, and the self-absorbed auctioneer (Jakob Öhrman) is disinterested in offering additional help. The painting is unsigned and has been merely attributed to “an unknown master,” but Olavi believes that vague description undersells what it really is.

With Otto’s help, Olavi investigates further. After some dogged, inventive sleuthing, the unlikely duo discovers that the portrait is actually a little-known work by Russian-born master Ilya Repin (1844-1930), a painting from a private collection that was once on loan to a Swedish museum. And, as their research further reveals, the painting is not that of a peasant (one of Repin’s specialties) but, rather, the artist’s depiction of Christ (hence the portrait’s title, Kristus). 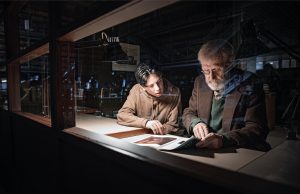 Art dealer Olavi Launio (Heikki Nousiainen, right), and his grandson, Otto (Amos Brotherus, left), investigate the background of an unsigned portrait by an unnamed master to determine its possible worth in the moving Finnish drama, “One Last Deal” (“Tuntematon mestari”). Photo by Cata Portin, courtesy of Making Movies Oy.[/caption]

Thanks to those revelations, Olavi would appear to have found his goldmine, and, since no one else seems to possess the information he’s uncovered, he would appear to be perfectly positioned to pounce on a bargain. What’s more, to sweeten his prospects, Olavi has a buyer in mind, Albert Johnson (Stefan Sauk), a wealthy Swedish collector of religious art. It would seem as though everything is in place for that big score to hit paydirt.

However, at the time of the auction, the bidding runs higher than expected. Despite his searing desire to come up the winner, Olavi is initially reluctant to make a bid as the price starts to soar. When he finally enters the fray, he’s looked upon as an unlikely bidder, prompting other would-be owners to wonder what he knows, which only serves to drive the price even higher. Yet Olavi remains steadfast, staying in the bidding, despite the price. And, when he eventually comes up the winner, he suddenly finds himself in possession of a painting he can’t realistically afford.

After a painful, emotionally draining process to raise the cash he needs to pay for the portrait, he believes he’s cleared his last hurdle. But, shockingly, more unexpected challenges await, sending even greater shivers down Olavi’s spine. What’s he to do now that he’s sitting on a potential fortune that he cannot capitalize on? That’s what he’s up against as he seeks to complete that final deal. 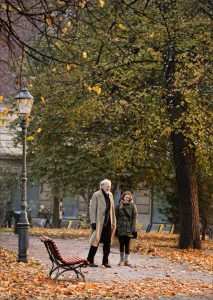 One can’t help but feel for Olavi. In many ways, he seems like a broken man, both professionally and personally, and the compassionate among us would certainly like to see him turn things around. However, given how the patterns of his life have persisted and the hand he appears to have had in their unfolding, boundless sympathy for his plight might be hard to come by. He truly is an art lover, which is assuredly noble, but he’s apparently been so obsessive about it that he’s been lax when it comes to other areas of his life. In fact, one could even say that he’s been oblivious to his circumstances, such as when he cluelessly asks a financially strapped Lea if she could loan him money to help cover the cost of the Repin portrait.

So how did Olavi get himself into these circumstances? It comes down to where he’s chosen to focus his consciousness, channeling it into beliefs that have effectively given him a tunnel vision perspective on his existence. That may not be a particularly desirable or beneficial outlook, but it’s what he’s drawn into his reality as a result of the conscious creation process, the philosophy that maintains we employ our thoughts, beliefs and intents to manifest the world we experience. And, in his case, it’s an existence with a rather dim and limited worldview. It’s no wonder he feels so unfulfilled.

To his credit, though, at least he realizes this when he envisions the prospect of retirement after a big score, one that he hopes will make up for past failings. The fact that he has come up with this idea, and even shared with Patu, shows that he’s earnestly set the process in motion, even if he hasn’t devised the specific means for making it happen. Nevertheless, the seeds of the notion have been planted, and beliefs aimed at supporting it are coming into being to materialize such an outcome.

Various factors contribute to this process. For example, in manifesting this opportunity, Olavi spends considerable energy tapping into his intuition, one of the elements that figures largely in belief formation. He rightfully suspects that a bright prospect exists somewhere, even if he hasn’t found it. And then, when he sees the Repin portrait for the first time, he’s instantly mesmerized by a painting that hasn’t received much attention from or billing by the auction house. Olavi intuitively recognizes that it’s a special piece, even if no one else does. At this point, the opportunity has successfully materialized, but what comes of it depends on Olavi’s beliefs regarding his ability to capitalize on it. Will he formulate sufficient beliefs that enable him to rise to the occasion? 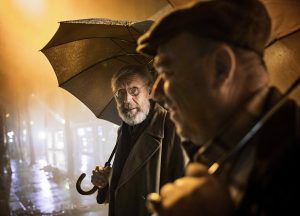 What happens next depends to a great degree on Olavi’s ability to overcome limitations in his beliefs, to think outside the box. That may be easier said than done, however, given how closed off he has been for much of his life. It’s not impossible, though, especially when inspired by way of example, something that Otto’s presence helps to make possible. Because of the unconventional research methods the teenage sleuth uses, he’s able to verify the painting’s authenticity, something that encourages Olavi to act on his hopes to make that big killing he’s seeking.

Naturally this calls for overcoming fears and living courageously. Olavi certainly has his share of those, given how events in his life have unfolded, both personally and professionally. However, if he truly wants to make the most out of the opportunity that has now presented itself, he must sincerely get past those hindrances if he expects to move forward. He also needs to have faith that circumstances will turn out as they’re supposed to, even when unexpected hurdles reveal themselves. If he allows himself to become discouraged, he’s not likely to arrive where he wants. But, if he believes in the possibility of redemption, especially when it comes to overcoming the fears that have been holding him back, he just might attain his goal.

This moving, heartfelt drama admittedly has some formulaic and predictable elements woven into its narrative, but the intriguing story line and fine performances by its excellent ensemble cast make for touching and engaging cinema. Director Klaus Härö presents viewers with richly layered, multidimensional characters, skillfully fleshed out to a degree not often seen in most contemporary releases. Above all, though, it’s truly refreshing to see a picture that’s both intelligent and emotional at the same time, a testament to the production’s direction and writing. This little-known Finnish offering has primarily been playing the film festival circuit, but it’s definitely time well spent if you get the chance to see it. 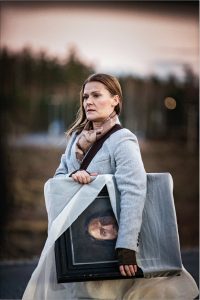 Lea (Pirjo Lonka), the long-estranged daughter of an ailing and aging Helsinki art dealer, seeks to make peace with her father through his acquisition of an unknown work by a Russian-born portrait master in “One Last Deal” (“Tuntematon mestari”). Photo by Cata Portin, courtesy of Making Movies Oy.[/caption]

When the gate’s about to close, we scurry to get past it before it’s completely shut. That may be a tricky proposition, but we can succeed as long as we’re committed to believing it’s possible and being willing to see it through. And, if we go about it with perseverance and panache, we just might end up with our own work of art.

Posted by Brent Marchant at 4:29 AM