What lies ahead for mankind's future? That's a question wide open for speculation these days, with predictions ranging from glorious enlightenment to utter degradation. And then there are those whose prognostications are truly visionary, such as those of inventor and futurist Ray Kurzweil, subject of the engaging documentary "Transcendent Man: The Life and Ideas of Ray Kurzweil," now available on DVD.

While Kurzweil may not be a household name, his impact on modern society has been significant nonetheless. He holds 24 patents, having invented devices as diverse as optical readers for the blind and various types of synthesizer equipment. He's also author of the best-selling book The Singularity Is Near: When Humans Transcend Biology, a treatise that maintains we must become bionic beings in order to keep up with the ever-accelerating rate of change. Such unconventional views have earned him labels ranging from "the best in the world at predicting the future," according to Microsoft co-founder Bill Gates, to a "highly sophisticated crackpot," in the eyes of others. But no matter what opinion one holds, Kurzweil is a captivating figure, and this documentary provides an intriguing look at his life and cutting edge ideas.

In moving forward, Kurzweil contends that we will be profoundly affected by developments in three key areas -- robotics, genetics and nanotechnology. He believes that advances in these disciplines will ultimately lead to a greater fusion of biology and technology, an occurrence that he sees as both necessary -- and inevitable -- to our future. This controversial vision has staggering implications, both positive and negative, in terms of potential, logistics and ethics, yet Kurzweil maintains that such a synthesis will become essential to us just being able to keep up. Such views have drawn both supporters and detractors, and insights from both contingents are presented in the film, offering a balanced, comprehensive approach to the subject.

In addition to Kurzweil's singular outlook, the documentary profiles its subject's personal life. We see the profound influence of Kurzweil's father, a talented musician who died at a comparatively young age. We learn of Kurzweil's health concerns, which impelled him to make significant changes in his life, most notably the focus of his work and the pace at which he worked toward realizing his goals. And we also get glimpses into his hyperconnected networking circle, which includes an array of technological, political and artistic luminaries, such as Colin Powell, William Shatner and Stevie Wonder, all of whom are featured in the film.

Given his accomplishments, it's apparent that Kurzweil is indeed a skilled conscious creator. Ironically, however, many of his views of how things manifest seem to run counter to the way this philosophy works, that materializations eventually spawn consciousness (something he believes will ultimately happen with computers) rather than the other way around. This, of course, begs the question, would such creations materialize in the first place were it not for the consciousness that envisioned them to begin with? Quite curious, to be sure.

The DVD's bonus materials effectively complement the main feature, providing intriguing supplementary viewing. For those who speculate about the nature of our species' future, this is definitely a must-see.
Posted by Brent Marchant at 2:26 AM 0 comments

Isn't it great when everything comes together perfectly at just the right moment? That's the power of synchronicity at work, the subject of my latest FengSHe post, When Timing Is Everything. Read more at www.FengShe.org.

How would you cope with the end of the world if you knew it was coming? That's a key theme probed in the new science fiction fantasy, "Melancholia." See my review, Life and death collide in murky 'Melancholia', now available at VividLife.me. 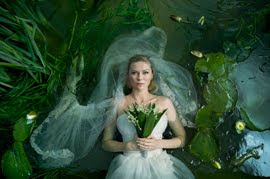 Posted by Brent Marchant at 9:34 AM 0 comments