Finding ourselves can be a difficult enough experience even under the best of circumstances. But, when the process is burdened by challenges and extenuating circumstances, it can become that much more difficult. So it is for a young man trying to discover himself in the gripping new coming of age drama, “Moonlight.”

The film tells the story of Chiron, a young African-American man growing up in Miami and Atlanta. In recounting his experience, the picture examines three phases of his life – his childhood, when he goes by the nickname Little (Alex Hibbert); his teen years, when he identifies with his given name (Ashton Sanders); and young adulthood, when he reluctantly refers to himself as Black (Trevante Rhodes), a nickname given him by a friend. The names are significant, partly because they serve as the titles of each segment but also because they aptly characterize who Chiron is in each phase of his life.

In many respects, Chiron has a number of strikes against him from the outset. As the son of a drug-addicted mother, Paula (Naomie Harris), and an absent father, the shy, small-framed boy is the regular target of bullies, who pick on him for his size and reserved demeanor. He’s frequently withdrawn, rarely speaking and often unresponsive when asked questions.

However, Little’s not without people in his corner, such as Juan (Mahershala Ali), a Cuban immigrant drug dealer, and Teresa (Janelle Monáe), his kindhearted girlfriend. These unlikely caretakers befriend the young man and attend to his needs, particularly when they witness Paula blatantly shirking her responsibilities to satisfy her drug habit. Little also receives encouragement from his childhood friend, Kevin (Jaden Piner), who tries to bolster his buddy’s self-esteem and teach him how to defend himself. Little needs all the support he can get, too, not just because of his circumstances, but also because of qualities he begins to sense about himself – most notably the fact that he might be gay, a trait often looked upon in the African-American community with feelings that are, at best, conflicted and, at worst, unabashedly close-minded. 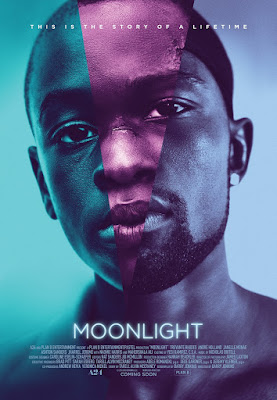 As Chiron enters his teen years, his awareness of his emerging sexuality grows. But, with no readily available role models to draw upon and with homophobic bullies, such as his loud-mouthed classmate Terrel (Patrick Decile), taunting him at seemingly every turn, Chiron becomes an easy target for abuse. Thankfully, a now-teenage Kevin (Jharrel Jerome) is still in Chiron’s life; he tries to stand by his friend but is eventually confronted with his own challenges that make this difficult.

Upon reaching young adulthood, Black takes drastic measures to take control of his life. Having relocated to Atlanta, he charts a different course from who he had been becoming in Miami. But, in many ways, his “new” life is also a throwback to his upbringing. What’s more, despite appearances of being in charge, he’s also decidedly unsure about who he has become. Is he really the person he wants to be? That’s the question he must ask himself, one that he gets a chance to answer when he receives an unexpected late night phone call from Kevin (André Holland), who he lost contact with after leaving Miami. Will Little/Chiron/Black finally learn who he really is?

When we witness a movie like this, we often ask ourselves, “How can events like those depicted here possibly be allowed to go on?” That’s especially true for those of us who tend to view life from an enlightened and open-minded perspective. But, for what it’s worth, not everyone shares those viewpoints. The homophobic and bullying attitudes on display here, regrettably, are all too real, and this film reflects them in all their hateful expression.

So how is it that such close-minded viewpoints are given license to exist? It’s because those who harbor thoughts, beliefs and intents designed to bring them into being see them through to manifestation. That’s the basis of the conscious creation process, the means by which we materialize the reality we experience.

Knowing that, it might be tempting to ask, “If we have a choice with what we do with our thoughts, beliefs and intents, then why don’t we just make better choices, opting for more enlightened pursuits instead of such malignant endeavors?” That’s a fair question, one that many of us would like to hope should be obvious to us all.

If only it were that easy.

For all of the potential good that conscious creation makes possible, the bottom line with this practice is that it makes all options possible, for better or worse, like it or not. This, of necessity, includes those possibilities that we find less desirable or even repugnant. However, because of the experience such negative circumstances afford, we also have the option to make better choices after having lived through them – something we might not understand until after going through those ordeals in the first place. Experience can be quite the teacher, even if its lessons are far from tolerable.

As another film that came out not long ago – “The Birth of a Nation” – aptly illustrates, sometimes we must endure conditions we find unacceptable to come to realize that they are indeed unacceptable. As that picture showed, nearly all of us today would find the concepts of slavery and inhuman brutality reprehensible. But can we truly say the same today when it comes to matters related to homophobia and bullying? Clearly we’ve made considerable progress in these areas, but there’s still room for improvement, as “Moonlight” pointedly shows. We can only hope that the light this film sheds on those subjects will help improve circumstances as we move forward.

Thankfully, even though conscious creation allows for the manifestation of the regrettable, it also just as readily enables the materialization of the positive, the enlightened and the innovative, qualities that help to promote wider acceptance and understanding of those conditions once looked upon as “normal” that subsequently are labeled deplorable. Chiron senses this throughout his upbringing; all he need do now is give himself permission to follow through on what he innately knows is possible.

Again, this is an area where “Moonlight” shines, providing viewers with an experience of the possible, an opportunity to potentially open closed minds. By depicting different options from what has typically been considered the norm, the film explores new possibilities, including both those in these particular subject areas and through the conscious creation process generally. That’s quite an accomplishment, and rarely is it portrayed as effectively as it is here.

In short, “Moonlight” is an important film, one well deserving of all the accolades it has received – and, one would hope, of the awards it’s worthy of winning. It provides a thought-provoking look at what it means to become who we’re destined to be while shaking up entrenched attitudes. In only his second feature-length film, writer-director Barry Jenkins has produced a masterful picture, one that nails its material in virtually every regard from start to finish. Its powerful and sensitive treatment of a touchy subject is handled skillfully, maximizing its impact through incisive writing, creative camera work and top-notch editing. But, above all, the film’s phenomenal ensemble cast (featuring many first-time performers) delivers superb performances across the board, particularly in its seamless depictions of Chiron and Kevin over time.

It’s hard not to come away from this film feeling supremely moved. But that shows the impact of the power of story, and that’s where prospects for change have an opportunity to take root in the minds of individuals and the collective consciousness. Let’s hope “Moonlight” can work its magic in reshaping the hearts and minds of those who would benefit from seeing things from a new perspective, one that ultimately works in the best interests of everyone.

Posted by Brent Marchant at 8:31 PM