A little kindness goes a long way, sometimes much further than any of us might expect. That’s a meaningful lesson for those who need some gentle nudges in that direction, and it’s an imperative for anyone who brazenly puts self-interest before all else. Such is the message of the 1992 award-winning screen classic “Howards End,” recently released in theaters in a digitally restored 25th anniversary edition. 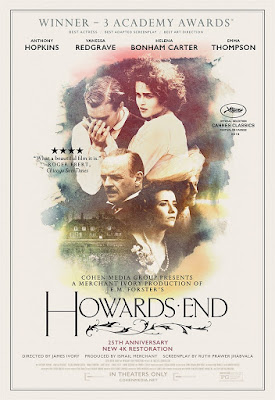 Based on the novel by E.M. Forster, the story of this engaging drama is rather involved, but it basically concerns the relationship of two sisters, Margaret (Emma Thompson) and Helen Schlegel (Helena Bonham Carter), with members of early Twentieth Century London society at opposite ends of the economic spectrum. Margaret befriends Ruth Wilcox (Vanessa Redgrave), the kindly but dying matron of a wealthy family who adores the sanctuary of her country home, Howards End. Ruth so appreciates the compassion that her new friend shows her that she seeks to bequeath the estate to Margaret, a decision looked upon askance by Ruth’s husband, Henry (Anthony Hopkins), her son, Charles (James Wilby), and her daughter-in-law, Dolly (Susie Lindeman). The Wilcoxes’ efforts to thwart Ruth’s wishes, though, take a number of unexpected twists and turns after her death, especially when Margaret becomes close to those who initially oppose her.

Helen, meanwhile, befriends an economically troubled clerk, Leonard Bast (Samuel West), desperately seeking to support himself and his wife, Jacky (Nicola Duffett). Over time, the relationship between Helen and Leonard grows progressively more intimate, a development viewed disdainfully by the Wilcoxes – that is, until unsavory secrets about their own connection to the Bast family are unexpectedly revealed. These revelations complicate matters all the more for everyone involved, leading to a stormy climax with wide-ranging implications, as well as more than its fair share of irony. 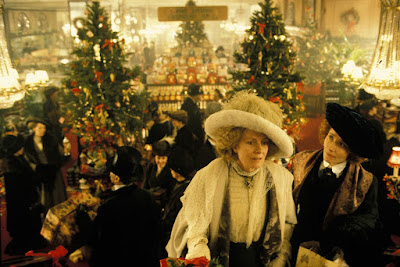 Given the intriguing story line of this film, it’s interesting to see how matters play out, with developments driven principally by the intents underlying them. The nature of those intents is important, too, not just here, but also in general, since they form the basis of the conscious creation process, the means by which we manifest the reality we experience – in all its aspects – through the power of our thoughts, beliefs and intents.

The beliefs that characterize the principals’ prevailing outlooks are especially crucial in this story, because they affect all of the particulars of their daily existences. Ruth and the Schlegel sisters, for instance, obviously believe in compassion and kindness, and their lives unfold with qualities and events reflective of this mindset. Outcomes may not emerge immediately nor without hitches, but the power and integrity driving the beliefs underlying them ultimately won’t be denied, no matter what obstacles may pop up. Prospective impediments inevitably can’t hold sway, because they inspire the creation and implementation of metaphysical workarounds aimed at dissolving whatever obstructions may appear.

In contrast to the beliefs of Ruth, Margaret and Helen, the self-serving worldview of Henry, Charles and Dolly yields results commensurate with their thinking. Their attempts at using beliefs to manipulate circumstances prove particularly telling, especially when they come into conflict with those driven by sincerity and altruism. The impact of these concocted intents essentially becomes thwarted, because those who put them forth know that they’re operating contrary to the stated wishes of others (and the inherent power of the beliefs that drive them). Gaming the system like this will only get someone so far, because the tainted nature of such manipulative beliefs can’t overpower those that emerge from genuine origins.

As stated above, this illustrates the significance of integrity in belief formation and implementation. If we work against this, we introduce contradiction into the mix, which, as with fear and doubt, throws a major wrench into the manifestation process. Results either don’t materialize or manifest in “distorted” forms, conditions that won’t change until genuine, full-fledged sincerity is introduced or reintroduced into the process. We should all bear that in mind if we think we can get away with swaying matters in directions that we know aren’t authentic. To attempt to do so will surely result in disappointment. 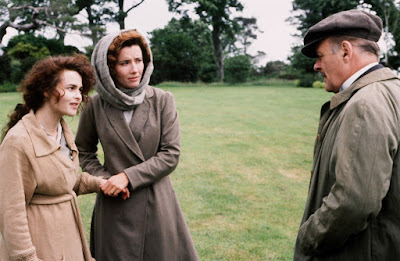 Sisters Helen and Margaret Schlegel (Helena Bonham Carter, left, and Emma Thompson, center) confront Henry Wilcox (Anthony Hopkins, right), widower of their deceased friend Ruth, when the wishes of her last will and testament are placed in jeopardy in the screen classic, “Howards End,” recently released in theaters in a new, digitally remastered edition to celebrate the film’s 25th anniversary. Photo courtesy of Cohen Media Group.

Acts of empathy – and acts of deliberate deception – come with consequences, both good and bad, and “Howards End” showcases them beautifully. This is elegant, masterful filmmaking at its best in virtually all respects, but then such scrupulously high standards are to be expected from the famed direction-production team of James Ivory and Ismail Merchant. The performances, cinematography and period piece production values are top notch and made all the more glorious by the picture’s remastering for the big screen.

“Howards End” was widely acclaimed at the time of its original release, and it was lavishly honored in awards competitions at the time. The film earned three Oscars, including for Thompson’s lead performance and Ruth Prawer Jhabvala’s screenplay adaptation, on nine total nominations, including nods for by best picture, director, cinematography and supporting actress (Redgrave). It also captured a Golden Globe Award for Thompson’s lead portrayal on four total nominations, including nods for best picture, director and screenplay. The Cannes Film Festival bestowed further honors on the picture as the winner of the event’s 45th Anniversary Prize and as a nominee for the Palme d’Or, the festival’s highest honor.

At a time when disparities between the haves and have-nots grow ever wider and when compassion and kindness seem to be in increasingly short supply, films like “Howards End” mean a lot to us, helping to restore our faith in our capacity to care. Let us hope the message is not lost on us.

Posted by Brent Marchant at 2:50 AM