In a world filled with coldness and cynicism, acts of unsolicited kindness have, unfortunately, come to be seen by many as anomalous gestures, deeds almost to be viewed with suspicion. It’s truly sad that we’ve reached such a point, one where we question the sincere altruism of others, convinced that there must be an agenda behind those actions. But need it be that way? That’s one of the key questions posed in the meditative Spanish drama, “Flowers” (“Loreak”), now available on video on demand.

When Ane Goñi (Nagore Aranburu) starts receiving weekly floral deliveries from an anonymous source, she’s perplexed but pleased. Given the personal rough patch she’s going through, brought on by early onset menopause and the general indifference of her husband, Ander (Egoitz Lasa), she’s happy to benefit from the joy the flowers bring her. Still, she’s curious to find out who’s sending them, especially when she learns it’s not from Ander, who himself is somewhat indignant that a stranger is showing his wife such attention.

Not long thereafter, however, the flower deliveries inexplicably stop. Curiously, this development, along with several other surprise revelations, coincide with the accidental death of a co-worker, Beñat Sanz (Josean Bengoetxea), whom she barely knew. Could he have been the source of the flowers? But, if so, why? After all, Beñat seems to have had enough problems of his own, trapped in a marriage to an often-agitated wife, Lourdes (Itziar Ituño), who frequently quarreled with his mother, Tere (Itziar Aizpuru), leaving him haplessly caught between the two.

After investigating matters further, Ane comes to believe that Beñat was indeed responsible for the flowers, and she’s now anxious to return the favor by leaving bouquets as a sort of makeshift memorial at the site of the car accident that killed him. She then finds herself befriending members of Beñat’s family, except, of course, for Lourdes, who can’t fathom why anyone would engage in such selfless gestures toward her deceased husband and his relatives – especially when she can’t bring herself to do the same. 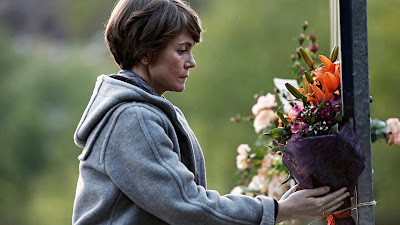 Ane Goñi (Nagore Aranburu), who once received flower deliveries from an anonymous source to cheer her up, returns the favor to honor the memory of the person she believed sent them, acts of kindness depicted in the thoughtful meditation, “Flowers” (“Loreak”). Photo courtesy of Music Box Films.

Acts as simple as sending flowers and extending common courtesies might not seem like much, but they serve as catalysts to help awaken emotions long dormant in many of us. They illustrate what it means to be kind to someone else, even if we don’t know them, just because it’s the right thing to do. They’re not actions to be questioned or looked upon with circumspection; they’re to be recognized and celebrated for what they are – gestures of goodwill, well-being and thoughtfulness.

So how is it that we have become so far removed from such attitudes? That’s difficult to say, but it’s unlikely that it was the result of a single individual act. Rather, it came about as a sea change in the mass consciousness, one that has subsequently manifested extensively as a result of a co-creation produced through the conscious creation process, the means by which we materialize the reality we experience through the power of our thoughts, beliefs and intents. And, given how widespread it has become, it’s unfortunate that this outlook has blinded us to the way things can be, so much so that we don’t even recognize those gestures of kindness and thoughtfulness for what they really are.

Allowing ourselves to buy into such beliefs can take on a life of its own, spreading like a virus. But it’s far from irreversible. Antidotes to such beliefs and creations can take root just as readily as those suspicious attitudes have; all we need do is invoke them. Envisioning the outcome and deploying beliefs to make them happen are what it takes, and, if enough of us do that, the practice can spread through the mass consciousness, becoming a co-creation that’s part of the prevailing culture.

Sounds like a good idea, doesn’t it? Imagine what the world could be like with such attitudes characterizing the present paradigm. This film challenges and inspires us to produce such a result – and to see just how beautiful and endearing it can be. We could all learn a lot from the acts of unprompted kindness and generosity on display here.

Lourdes Sanz (Itziar Ituño), who loses her husband in a car accident, has trouble relating to his death and the survivors of his family in the compelling drama, “Flowers” (“Loreak”). Photo courtesy of Music Box Films.

Of course, a picture like this naturally begs the question, “How did we go astray in the first place?” As the experiences of the characters illustrate, sometimes we create chaos, heartache and despair in our lives (generally as part of our individual learning curves, even if we don’t recognize such developments as such). These incidents, in turn, often lead to responses where we become sad or embittered, perhaps even causing us to lose our faith in the world, including its positive and empathetic attributes. This leads to cynicism and suspicion, particularly when we encounter others who exhibit behavior that runs counter to our expectations. In those situations, we seldom know how to react, because those gestures don’t fit out worldview. We may be fundamentally incapable of comprehending how others can possibly act in such ways.

At the same time, though, those gestures can also serve as a starting point for turning things around. When we witness or are the beneficiaries of such acts, our beliefs may begin to change. They might even encourage us to respond in kind when we encounter others in need of such support. If enough of us do that, the idea may spread like wildfire, infusing itself into the culture of the prevailing paradigm, perhaps even changing the world. And to think it can all start with something as simple as sending someone a bouquet of flowers.

“Flowers” is a gem of a film, one that may be a little difficult to find but one that’s well worth the effort. This Basque language picture features gorgeous cinematography, an intriguing story line that will keep viewers continually guessing and an excellent cast, many of whom deliver what should have been award-worthy performances (especially Ituño and Aizpuru). But, most of all, the empathy this thoughtful picture evokes, one would hope, should inspire us all.

Tere Sanz (Itziar Aizpuru), who loses her son in a car accident, has trouble understanding her daughter-in-law’s lack of compassion over her loss in the thoughtful Spanish drama, “Flowers” (“Loreak”). Photo courtesy of Music Box Films.

Changing the world doesn’t always require massive undertakings. Sometimes the process can begin with simple acts whose impact ripples like waves in a pond. The result may not be instantaneous, but the eventual outcome is almost assuredly undeniable. And what a beautiful creation that would be.