Many of us are favorably impressed by those savvy individuals who exude confidence and have a knack for self-assuredness. Their independent spirits make them objects of emulation. Indeed, who wouldn’t want to be like them? Regrettably, a good many of us look upon them in intimidation or envy, wishing we could follow their leads (and frequently believing that we can’t). But looking to their experiences is exactly what we should do if we ever hope to change our own circumstances. One particularly inspiring example is more than amply set by the Victorian heroine in the classic Thomas Hardy novel, “Far from the Madding Crowd,” recently released in a beautiful new cinematic adaptation.

Anyone who thinks they can “tame” Bathsheba Everdene (Carey Mulligan) is in for a rude awakening. Even though the independent, self-confident, charismatic young woman’s approach to life is rather uncommon for 19th Century England, she makes it perfectly clear that she will do as she will, no matter what others may say or think (especially men). She particularly enjoys challenges, and, when she inherits a sizable though somewhat-rundown farm from her uncle, she gets her chance to prove to everyone just what she can do. As the mistress of her estate, she vows to reverse the farm’s fortunes – and to expand upon those she’s already amassed. 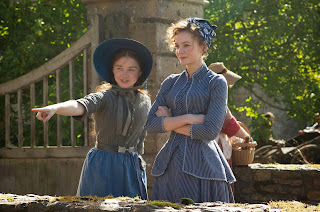 But, even with that said, there are those who would like to see Bathsheba bend to their charms (if not their wills). Gabriel Oak (Matthias Schoenaerts), a kindly, albeit socially awkward neighboring farmer who comes to work on Miss Everdene’s manor, would welcome the opportunity to make Bathsheba his wife. However, Mr. Oak is not without competition in this pursuit. William Boldwood (Michael Sheen), the reserved, middle-aged owner of a prosperous neighboring estate, also seeks Miss Everdene’s hand, though he mostly winds up frustrated, quietly pining for her from afar. And then there is Sgt. Francis Troy (Tom Sturridge), a handsome but somewhat reckless young soldier who believes he was jilted by his fiancée, Fanny Robbin (Juno Temple), who, because of a miscommunication, accidently left him standing at the altar; he now seeks a new path in life and believes he’s found it through a seemingly chance encounter with Miss Everdene. 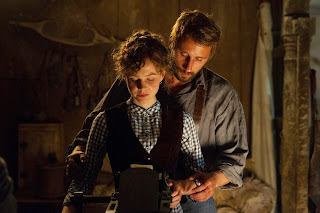 Bathsheba is quite taken with all the attention, and, to some degree, she seems to relish the flattery. She’s also quietly pleased to have so many courtship choices available to her. But then there’s the matter of preserving her independence, which she values tremendously. She often wonders what would happen to that if she were to take a husband. Would marrying be worth it? Would she have to subvert her natural tendencies and sacrifice her freedom simply because she’s become someone’s wife? What should she do?

As Bathsheba attempts to sort out her options, she seeks the advice of others, most notably her trusted confidante, Liddy (Jessica Barden). But, ironically enough, she also finds herself increasingly consulting Mr. Oak, whom she discreetly comes to regard as much a friend as a potential spouse. At the same time, Gabriel grows more at ease in his dealings with Bathsheba, which allows him to become more comfortable in freely speaking his mind, letting her know what he really thinks, whether in matters of farm management or in those of the heart.

Mr. Oak’s candor occasionally strikes a nerve with Bathsheba, causing her to become uncharacteristically defensive, revealing a hitherto unseen vulnerability. And, when she informs him that her romantic inclinations are veering in other directions, their relationship turns decidedly tense, even confrontational. But, to her credit, Miss Everdene also recognizes the sincerity of Gabriel’s advice, prompting her to carefully consider it when making decisions and taking action (sometimes in the moment but at other times in hindsight), all of which carry profound implications for her future. What will she do? 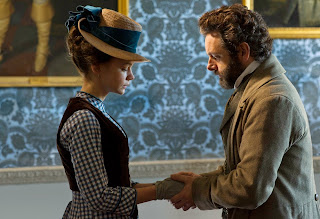 Thankfully, Bathsheba has a strong sense of self. She has a firm handle on what she believes about herself, which stands her in good stead when it comes to exercising her conscious creation skills, the means by which she manifests the reality she experiences. Indeed, knowing oneself in this way is crucial for mastering one’s personal power, which is essential for creating an existence sufficiently in line with one’s hopes, wishes and dreams.

Knowing ourselves also means knowing that we have the power of choice at our disposal at any given time. Bathsheba unreservedly exercises that power, too, as evidenced by the arrays of options she routinely draws into her reality. For instance, she has three would-be suitors vying for her hand, and she could easily choose any of them – or none of them – depending on what she believes ultimately best suits her. We should all be so fortunate to possess such prescience (especially given how many of us fail to recognize these fundamental capabilities in the first place).

However, even with an awareness of the foregoing, we may also allow our beliefs to become inflexible, perhaps even dogmatic. This could easily interfere with our sense of discernment in evaluating the possibilities available to us. That can even happen to someone as self-aware as Bathsheba, who is so invested in her sense of independence that it might blind her to some of her options. She thus runs the risk of summarily ruling out opportunities that involve interaction with others that may well work to her benefit. In circumstances like this, knowing when to distinguish one’s beliefs from one’s dogma is critical in finding one’s destiny. 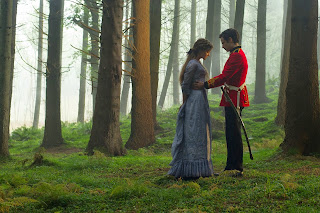 Sgt. Francis Troy (Tom Sturridge, right), a young soldier who believes he was jilted by his fiancée, seeks a new start in life by wooing the fair Bathsheba Everdene (Carey Mulligan, left) during a chance encounter in the latest cinematic remake of the classic Thomas Hardy novel, “Far from the Madding Crowd.” Photo courtesy of Fox Searchlight Pictures.

Fortunately, Bathsheba has the good sense to seek counsel when the need arises. She might not always like what she hears, but she at least allows herself to be open to the advice. Whether she acts upon such guidance – by incorporating it into her existing beliefs – is another matter, however, and one that’s obviously up to her. But, as an adept conscious creator, she’s well aware that, to achieve the results she wants – those that further her sense of personal well-being – she must assess all of the intellectual and intuitive input available to her to formulate suitable beliefs with that goal in mind.

For someone as headstrong as Bathsheba, some might view her reliance on such “outside” advice as a weakness, a deficiency in her capability to make her own decisions. But, as anyone who truly leads a life as a self-actualized conscious creator knows, being able to admit that we do not have all the answers, and leaving ourselves open to all available information to make astute decisions, is actually a sign of personal strength. The capability to honestly acknowledge the strength (and extent) of our self-awareness ultimately allows us to more effectively pursue our sense of personal happiness and satisfaction. If you need proof, just ask Bathsheba.

This latest adaptation of “Far from the Madding Crowd” (having previously been made as a theatrical release in 1967, a silent film in 1915 and a made-for-TV movie in 1998) is a sumptuously beautiful production. The picture features excellent period piece production values, fine acting, a grand, swirling soundtrack, and exquisite cinematography (though, admittedly, there is some peculiar camera work in several sequences). The story is generally faithful to the source material, with only minor variations that do not substantially alter the original narrative. All in all, this release is yet another fine offering from director Thomas Vinterberg, who consistently proves himself time and again to be one of today’s most skilled (and underrated) filmmakers.

Fanny Robbin (Juno Temple), the fiancée of a handsome young soldier, meets an unexpected fate on her way to the altar in “Far from the Madding Crowd.” Photo courtesy of Fox Searchlight Pictures.

Even though awards season is still months away, it’s not too early to start looking at contenders for possible consideration, and “Far from the Madding Crowd” presents multiple possibilities in that regard, particularly in the technical categories. However, its performances are also worthy of note, especially Mulligan, who easily gives one of the best female lead portrayals so far this year, and Sheen, whose subtle depiction of the lovelorn Mr. Boldwood is full of nuance and emotional power. Here’s hoping these performances are not forgotten when the nominating ballots are mailed out.

In William Shakespeare’s classic opus Hamlet, wise old Polonius counsels “To thine own self be true.” That is undoubtedly astute advice, and it’s particularly relevant when we engage our conscious creation skills. By keenly scrutinizing our sense of self, judiciously exercising our power of choice and robustly employing our discernment skills, we have an opportunity to manifest an existence that brings us the satisfaction and contentment we so earnestly desire. This film beautifully illustrates how such conditions arise, showing us the way to live lives that place us in circumstances that foster and nurture our personal growth and well-being – and that take us far from the madding crowd.

Posted by Brent Marchant at 7:09 AM