‘Rust and Bone’ examines reinventing oneself

Starting over in life can be quite daunting, particularly when one is faced with exceptionally devastating conditions. Getting a foothold on a new way of living can be difficult, too, filling one’s head with images of the seeming futility of grasping at those proverbial straws. But, no matter how seemingly cruel such circumstances might appear, beginning anew is essential to our continued exploration of physical existence as two lost souls discover for themselves in the edgy new French romance, "Rust and Bone."

Alain "Ali" van Versch (Matthias Schoenaerts) is seeking a fresh start. As a single father with virtually no money in his pocket and his five-year-old son Sam (Armand Verdure) in tow, he leaves his home in northern France for the southern resort town of Antibes, where his sister Anna (Corinne Masiero) has agreed to take him in while he gets his house in order. The former security guard who dabbled as a kick boxer quickly lands a job as a bouncer at a local nightclub. Things seem to be shaping up well, but they take an unexpected turn one night while at work.

In the course of breaking up a bar fight, he comes to the aid of a young woman caught up in the midst of the melee, Stéphanie (Marion Cotillard). Unlike most of the other women at the club, whom he tends to look upon mostly as potential one-night stands, he’s strangely captivated by this unlikely damsel in distress, who’s simultaneously aloof and alluring. He goes out of his way to help her, doing more than he typically would under the circumstances, eventually giving her a ride home – and his phone number.

Not long thereafter, Stéphanie experiences a serious setback of her own. As an orca trainer at the local marine park, she’s severely injured during a showtime accident that costs her both of her legs. Depressed and confined to a wheelchair, she decides to make use of the phone number of the stranger who was so kind to her, reaching out not only for his assistance but also in an effort to reconnect with life. They slowly forge a bond, one that simultaneously gives Stéphanie a new will to live and that inspires Ali to pursue the boxing interests he had previously left behind. It’s an unusual relationship but one that transcends love; it’s also one that pushes each partner to better understand themselves and to grow as individuals, an outcome that pays benefits in myriad ways.

Reinventing oneself in the face of adversity can be a daunting task, especially when one harbors personal beliefs that run counter to, or even undermine, such attempts at transformation. It’s easy to allow oneself to become discouraged, especially when the challenges mount and progress is slow. But having someone to serve as a source of encouragement can go a long way to dispel such obstacles, especially when one views the other as having greater tests to overcome. Such inspiration can lead to levels of personal growth never dreamed possible.

Of course, to reinvent ourselves, we need to know from whence we’re starting. This involves becoming intimately familiar with who we truly are and getting real about it. We need to take stock of the beliefs we hold and how they manifest the reality we experience through the conscious creation process. Only by doing so can we see where alterations and adjustments are needed to come up with new beliefs that are more in line with the existence we ultimately hope to create.

Accomplishing this sometimes requires us to get in touch with feelings that are very raw. We have to take a hard look at ourselves, a process that’s often far from easy. Ali, for example, needs to overcome the self-centeredness that has characterized much of his life. But, to attain that goal, he must first recognize its existence before he can even begin to think about changing it, a behavior to which he has been largely oblivious. In doing so, he must also take responsibility for all of the creations that arise within his life, and there’s no better tonic for this than having to become accountable for the materializations that comprise our existence. Having to take on the responsibility of caring for a five-year-old child and a disabled girlfriend can go a long way to achieving that objective for someone trying to get over being preoccupied with only himself. Such actions open new doors for us, leading to whole new levels of personal growth and development.

Stéphanie has challenges of her own to overcome as well. In addition to rising above the despair over the loss of her limbs, she must learn that there are other things in life to love than her beloved whales, for all practical purposes the almost-exclusive source of joy in her life before her accident. Because she’s unable to continue her work at the marine park, Stéphanie must find a new outlet for her passions and affections. And, if people are to become the beneficiaries of such emotions, she must come to realize that being aloof toward them won’t do much to win them over. A new approach, and beliefs that support it, are clearly needed. But the payoff from such newfound awareness can be tremendous, such as the realization that love may very well arise from sources that weren’t previously envisioned.

"Rust and Bone" is a film full of passions, many of which are depicted in a very honest, graphic manner. The boxing sequences and love scenes, for instance, are both filmed in a very uncompromising manner, so sensitive viewers take heed. The picture also features passionate, heartfelt portrayals by the two leads, particularly Cotillard, who has deservedly earned best actress nominations for her outstanding performance in the annual Golden Globe, Screen Actors Guild and Critics Choice award competitions. The movie itself has also earned its own share of accolades, capturing nominations for best foreign film in the Golden Globe, Critics Choice and Independent Spirit award competitions.

As well as the characters are fleshed out, however, their motivations aren’t always made as clear as they could be. A lot is left to implication, which, if unrecognized, might justifiably lead some viewers to think that the narrative meanders aimlessly at times, a shortcoming that probably could have been overcome with some additional clarity in the writing, editing and direction. Nevertheless, this drawback doesn’t seriously detract from an otherwise-fine film. The picture’s performances, cinematography, soundtrack and emotional intensity more than make up for this.

The struggle to be reborn can be a challenging one, but it can be made that much easier when there’s a companion for the journey, someone to offer encouragement, inspiration and, above all, love. When faced with such circumstances, perhaps intentionally seeking to draw someone to us who can aid us in our efforts is one of the wisest courses we can follow, providing us with a source of support, reassurance and comfort. "Rust and Bone" illustrates one such example of this and does so without becoming sloppy or sentimental in the process. It shows us how love can help conquer all – and rather handily at that. 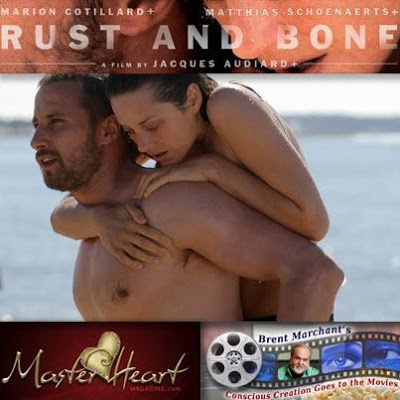