‘Alice’ colorfully examines the process of starting over

Life sure seems unfair at times. We may think we’ve got it made when, all of a sudden, everything evaporates before our very eyes. We might be shattered (and rightfully so), unsure of where to turn next. However, such a turning point could be one of the best things to ever befall us, a scenario explored in the new French domestic drama, “Alice.”

From all appearances, Alice Ferrand (Emilie Piponnier) leads a stable, contented, reasonably happy life. The young Parisian wife and mother keeps a busy schedule tending to the needs of her husband, François (Martin Swabey), and their young son, Jules (Jules Milo Levy Mackerras), as well as helping out others, such as her friend, Carole (Juliette Tresanini), but things overall seem generally pleasant.

However, that all disappears one morning when she attempts to use her credit cards and to obtain funds from an ATM: All of her transactions are turned down. Alice frantically calls François to see if he knows anything about this, but she keeps getting his voicemail, leaving messages that are never returned. And, when she checks with her financial institutions, she learns that her husband has withdrawn large amounts of cash and failed to make payments on their debts for months. With no money in hand, the threat of eviction looming and no response from François, the young mother with a high-maintenance toddler in tow is clearly up against it – and no idea how to move forward.

To make matters worse, all of the resources Alice thought she could count on for help turn a blind eye. In a painful phone call to her mother (Marine Blake), Alice explains her situation, but mom shows little sympathy, even taking François’s side, suggesting that her daughter isn’t working hard enough at her marriage – and probably not doing enough to keep her husband “satisfied.” Whether or not accurate, that last sentiment proves rather uncanny, especially when Alice discovers that most of the missing funds have been paid out to a company called Elegant Escorts. François, it seems, has been engaging the services of expensive prostitutes for months, so much so that it has depleted the couple’s financial resources.

When Alice contacts the escort service, the company’s owners, Véra (Marie-Laure Dougnac) and Jessica (Marie Coulonjou), offer little information over the phone, but they invite their caller to attend their offices for their next group audition. Desperate for answers, Alice accepts the invitation to find out whatever she can. But, much to her surprise, in the wake of her appearance at the audition, the beautiful young mother learns that the owners would like to bring her on board as one of their girls. Alice doesn’t initially know how to react, but, when she learns of the kind of money she can make – more than enough to bail her out of her financial woes and to adequately support herself and Jules – and considering the hurt François caused her, Alice figures, “Why not?”

Given that she’s new at this sort of thing, Alice starts off somewhat comically and clumsily, but, thanks to an understanding first client (Philippe de Monts), she manages to work her way through it and get paid. And, with tips from Lisa (Chlöé Boreham), one of her escort peers who has become quite proficient at her craft, Alice hones her skills as well, quickly amassing a bundle that helps her pay off her debts. She even seems to enjoy what she’s doing, relishing the liberation that this new line of work has provided her.

But, just when things start going well for the first time in a while, she’s hit with another bombshell – François returns, admitting his guilt and looking to reconcile. He begs Alice to forgive him for the foolishness of his ways, that he desperately misses her and Jules. However, having now had a taste of freedom and realizing that she no longer needs her husband in her life, she resists nearly all of his attempts at conciliation. Admittedly, she’s willing to avail herself of his assistance when she needs a babysitter to take care of Jules when she needs to go out on a call, sincerely believing that he owes her. But, unfortunately, that sends the wrong message, giving François false hope for the future – and opening the door to nasty prospects that threaten to undo all the progress Alice has made, not to mention wiping away all of her newfound happiness.

When Alice initially uncovers what’s unfolding in her life, she’s understandably devastated. In a matter of hours, everything she had come to believe about her daily existence was wiped away, leaving her not knowing what to think. To be sure, such an unanticipated downfall is nothing to be minimized. However, at the same time, it also represents a tremendous opportunity, to start with a clean slate and begin anew. And the promise and potential behind that all rests with Alice herself; given that the beliefs she held constituted the basis for her old existence, it stands to reason that whatever new beliefs she chooses to embrace will do the same for the new one she manifests for herself. It’s an outcome made possible by the conscious creation process, the philosophy that maintains we materialize the reality we experience through the power of our thoughts, beliefs and intents.

Because conscious creation innately makes anything possible, all outcomes are essentially fair game. With a limitless palette of belief options available to her, Alice can choose virtually anything she wants for a fresh start. Considering what she recently experienced, it may not be easy to view her circumstances in this light. However, if she (or anyone, for that matter) can see such an opportunity for what it is, unburdened by the weight of emotional baggage, the world truly could be her oyster (though, given her zeal and proficiency for her new line of work, oysters probably aren’t necessary).

Nevertheless, just because Alice is embarking on her new life, that doesn’t mean the rules governing conscious creation don’t apply. This is particularly true where it comes to matters of responsibility. After all, given that everything we create comes from us and our beliefs, it also means that we bear the responsibility for whatever we materialize, including whatever fallout, side effects and consequences result. We can clearly see what comes from that, for example, in François’s case: The beliefs and intents underlying the fulfillment of his sexual needs indeed brought him the carnal pleasure he sought, but it carried an enormous price. And, in the wake of his loss, he was left broke and without the wife he loved more than he ever realized. (Such is the dual-edged sword that acts of creation can sometimes be.)

Alice has responsibility issues to cope with in light of her new belief choices, too. Most notably there’s the caretaking of her son; after all, dragging one’s child along on an out call doesn’t leave the best impression, so alternate accommodations must be put into place to attend to everyone’s needs. And then there are the inherent risks of her profession itself, conditions that could expose her to all sorts of difficulties from legal, health and reputational standpoints. Of course, all of these concerns can be addressed by incorporating suitable beliefs up front, intents that cover whatever needs to be tackled, minimized or avoided. Preparing for these kinds of contingencies at the outset is in itself a responsible act, one that can stave off unwanted consequences.

Alice’s decision to become an escort may not be everyone’s choice, especially in light of some of the concerns noted above. However, considering what she was up against, she had to take drastic measures to escape her circumstances. This required her to break through limitations, to seek solutions that brought her what she needed, no matter how unconventional they might seem to others – or how they even might have seemed to her at one time. Alice’s novel approach thus suitably fulfilled her material needs. It also probably didn’t hurt that it provided her with a certain degree of self-satisfaction in being able to turn the tables on François by giving him a taste of his own medicine. 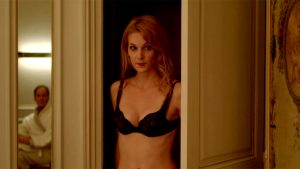 After a challenging start as a high-end escort, Alice Ferrand (Emilie Piponnier, right) develops a proficiency for her craft in “Alice.” Photo courtesy of Visit Films.[/caption]

What’s even more remarkable, though, are the unforeseen benefits that come out of Alice’s decision. For instance, after spending some time in her new line of work, she discovers feelings of liberation and personal fulfillment, qualities that weren’t present (at least to the same degree) during her days as a wife and mother. At the same time, she also discovers an unexpected capacity to give joy to those in need of it, such as some of her clients (David Coburn, Robert Burns), some of whom are even able to return the favor when the need arises. But, most importantly, Alice’s new life provides her with a newfound sense of personal empowerment. And, with an awareness of a quality like that, there’s no telling what she (or any of us) might be able to create with it.

This innovatively empowering, warm and sometimes-funny tale hits most of the right notes, albeit a tad predictably at times. The premise of this domestic drama may seem a bit far-fetched for some (even though it is very French), but its inventive narrative is certainly thought-provoking in its own way. With a fine lead performance by Emilie Piponnier, atmospheric cinematography and an excellent original score, director Josephine Mackerras’s feature film debut serves up an entertaining and evocatively offbeat source of inspiration. “Alice” is currently available for first-run online streaming. 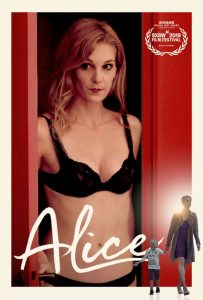 The sourness of the lemons life sometimes hands us can leave more than just a bad taste in our mouths. However, sugar is easy to find to transform those acrid juices into something delicious. We just need to keep our eyes open and know where to look. Alice Ferrand certainly knows how, and we could learn a lot by following her example so that, when the time comes, we’ll know just what to do to drink up and enjoy.