It’s one thing to be ever-practical when it comes to conducting our affairs, but this approach may sometimes limit our options, outcomes and effectiveness. By contrast, we could adopt a truly visionary view, one that surpasses these shortcomings but that also may be difficult to fulfill due to lack of pragmatism. So it’s quite something when we’re able to fuse both qualities, making it possible to work truly inspired wonders. Such is the approach employed by an accomplished statesman, one whose achievements arguably have not received the recognition they deserve, notions addressed in the engaging new documentary, “Meeting Gorbachev.”

As the 1980s began, almost no one foresaw the significant changes that were to come over the next 10 years. However, as the decade played out, it led to an array of geopolitical shifts that carried on into subsequent years and whose impact has been felt ever since.

Nowhere was this more apparent than in the Soviet Union, a declining superpower that was being propped up largely by its own propaganda. The woeful state of the country was generally not known outside its borders, but Soviet citizens were all too aware of its shortcomings, experiencing its problems, frustrations and inadequacies on a daily basis. A string of aging and ailing leaders – Leonid Brezhnev, Yuri Andropov and Konstantin Chernenko – did little more than keep the seat warm, unable to meet the needs of a population that was tiring of perpetual shortages, rampant ineptitude and runaway corruption.

However, there was one Soviet political figure who saw the handwriting on the wall, one who knew that sweeping reform was desperately needed, one who brought a visionary pragmatism to the table and sought to see it implemented. This little-known figure seemed to come out of nowhere but quickly rose to prominence on the national and international stages, his name becoming synonymous with change in an evolving USSR, Mikhail Gorbachev.

“Meeting Gorbachev” recounts the Soviet leader’s recollections of these events. Director Werner Herzog interviews Gorbachev about his accomplishments – and disappointments – and the impact they’ve had on shaping the world of today. Intercut with these conversations are archive footage of the events themselves, as well as interviews with those who were witnesses to history, including former US Secretaries of State George Shultz and James Baker, former Hungarian Prime Minister Miklós Németh, Solidarity Founder Lech Walęsa and former West German foreign affairs advisor Horst Teltschik. This combination paints an intriguing portrait of the film’s central figure. 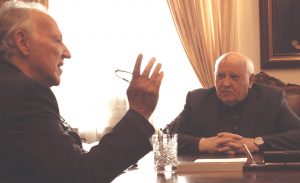 From meager beginnings in rural Russia, Gorbachev grew up in the shadow of World War II and the abuses of the Stalinist regime. Life was difficult during those times, conditions that made him acutely aware of the difficulties involved in issues as basic as everyday survival. He drew upon that experience as he moved up through the ranks of the Communist Party, taking a practical approach to his official duties in such areas as agriculture and civil engineering projects.

By the late ʼ70s and early ʼ80s, Gorbachev could see that the Soviet Union was on the brink. The protracted Cold War with the West, a failed occupation of Afghanistan and simmering domestic discontent were placing an increasingly greater strain on the country, all of which could no longer be afforded. Things had to change, and, by the time Gorbachev got his shot at the top slot in 1985, he at last had his opportunity.

In the ensuing years, Gorbachev made a point to reach out to the citizenry to learn what was needed. This led to the formation of his now-famous policies of perestroika (restructuring) and glasnost (openness), doctrines that became immensely popular both at home and abroad. It helped him win over many allies and to amass considerable political capital, assets that would prove exceedingly valuable in 1986, when he faced one of his greatest leadership challenges, the nuclear accident at Chernobyl. This incident marked a turning point in both Gorbachev’s rule and in the history of the Soviet Union.

Chernobyl helped Gorbachev realize the dangers of nuclear technology, not only when it comes to power plants, but also to weapons of mass destruction. He knew that the world could not continue on the course it was on. An out-of-control arms race, he believed, was too great a risk to the future of civilization if it continued unabated. Thus began Gorbachev’s initiatives to reach out to the West, most notably President Ronald Reagan and British Prime Minister Margaret Thatcher, to bring these matters under control.

Not long thereafter, Gorbachev witnessed the rise of democracy movements in the Soviet Union’s satellite states in Eastern Europe, most notably Hungary, Poland and Czechoslovakia. He also watched the Soviet occupation of Afghanistan – a mess he inherited from his predecessors – spiral into a quagmire that was being referred to as “Russia’s Vietnam.” Realizing that he could barely manage what was happening at home, he knew that he could ill afford to take on what was happening outside his borders. These insights prompted him to handle these situations differently from his forbears, taking no action against the Eastern Bloc and withdrawing troops from his southern Islamic neighbor. Thus began a chain of events that led to the dissolution of the Warsaw Pact, the fall of the Berlin Wall and even the reunification of Germany.

Collectively, these changes brought about huge alterations in the geopolitical landscape. But, despite the progress they represented, for some, the changes didn’t unfold far or fast enough. Opportunists thus emerged to invoke their own agendas. In August 1991, a coup d’etat attempt was made to oust Gorbachev while he was vacationing with his family, but loyal supporters squelched the challenge to his authority. However, despite his success in this incident, he also faced secession initiatives launched by a number of Soviet republics, most notably the Baltic states of Lithuania, Latvia and Estonia. It wasn’t long before other republics followed suit, a move that led to the Soviet Union’s dissolution.

Once out of office, Gorbachev devoted much of his time to the establishment of a foundation, lecturing and serving as a political advisor. However, as he observes in the film, there’s a sadness associated with his later years. He’s disappointed that he was unable to complete the work he started, such as increased democratization, bridging the European Community and the Soviet Union, and continuing his work for nuclear disarmament. He’s also saddened that many of his onetime supporters abandoned him once he was no longer in power. Much of his enthusiasm was further sapped by the loss of his wife, Raisa, the love of his life, to leukemia in 1999.

Given these developments, it might be a stretch to call him “a broken man,” but the now-88-year-old has clearly been wounded by what happened to him after such a promising and  auspicious start. Nevertheless, in light of how much Gorbachev accomplished, his opinion still carries weight, and we’d be wise to listen to it. He’s concerned about the current state of relations between Russia and the West, fearing the rise of a new Cold War and a new arms race. He sees this as a classic case of not learning from the past, particularly where nuclear armament is concerned. It would indeed be a tragedy if everything he worked for were to be wiped out by the shortsightedness of current leaders.

When one considers how much meaningful change Gorbachev was able to implement, one can’t help but wonder how he did it. But, in examining his means and methods, it’s apparent that he’s quite skilled in the practice of conscious creation, the philosophy that maintains we manifest the reality we experience through the power of our thoughts, beliefs and intents. Even if he’s never heard of it, his track record shows he’s certainly accomplished in its principles. 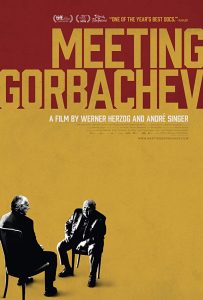 As noted above, Gorbachev is best described as a pragmatic visionary, one who’s able to picture what he wants to achieve but understands the need to reach that goal by practical means, even if he’s initially unaware of exactly what those means are. To accomplish this, he envisions what he would like the outcome to be and then actively seeks input on how to realize it. This approach is precisely how we go about forming the manifestation beliefs we need to attain our desired results. Through the process of visualizing, he draws upon his intuition to imagine the end result. And, then, by pursuing the implementing knowledge he needs to fulfill his objective, he taps into his intellect to provide the nuts-and-bolts information required to achieve that end. Thus, by drawing upon these two sources of belief input, he avails himself of the essential metaphysical tools that go into the materialization process.

To make such grand plans possible, several other conscious creation principles come into play. For instance, if change is on the menu, then tapping into our innate capacity for this is essential. This is particularly true when it comes to overcoming limitations for solving thorny problems. And, considering what Gorbachev was up against when he took office, these concepts obviously were crucial to his success.

Most importantly, though, Gorbachev’s manifestation efforts aptly reflect the principle of value fulfillment, the notion that encourages us to be our best, truest selves for the betterment of ourselves and those around us. Again, in light of what he faced when he assumed power, Gorbachev earnestly believed that he had to serve as an instrument of perestroika and glasnost if his country, his people and his planet were to survive. As conscious creators are well aware, value fulfillment can take myriad forms, but, when it’s drawn upon for goals as ambitious and noble as those Gorbachev sought, that’s truly one of the best ways this principle can be put to use. From what we’ve seen thus far, his efforts were successful; let’s hope we can hold on to what he helped bring about.

Despite a slight tendency to shortchange the first-person views of the film’s principal subject (especially where his life outside of politics is concerned), “Meeting Gorbachev” presents a thorough look at the truly remarkable accomplishments of this Soviet statesman. Some might see director Herzog’s latest as a love letter that sometimes gushes a bit much, but it also candidly sets the record straight on Gorbachev’s achievements, presenting little-known insights into historic events from both the protagonist and those who collaborated with him. This genuinely moving and inspired work is definitely worthwhile viewing, especially in light of present-day conditions.

When the fate of the world is at stake, we need to take matters seriously if we hope to survive. This means looking at our circumstances for what they really are and not what we would like them to be, no matter how difficult, daunting and disconcerting the situation may be. By adopting a realistic view, we place ourselves in a position from which we can start to work toward solutions that will help us overcome the challenges at hand. Gorbachev understood this and employed it in his endeavors – and has left us with a shining example to draw upon.