‘Normal Is Over’ outlines the need for global change

The subject of climate change has been prominent in the minds of the public for some time now. And, while debates have raged about the exact cause of the phenomenon, the fact remains that change is nevertheless occurring – and rapidly. The implications of this are staggering, from shifting weather patterns to species extinction to all manner of unforeseen fallout, such as social unrest, food and water shortages, economic chaos, and runaway mayhem. But what can we do about it? 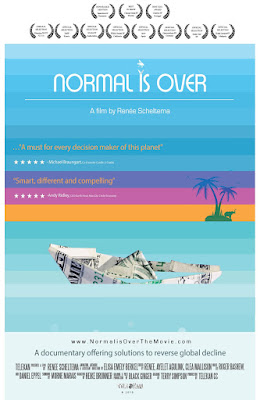 That’s what Dutch documentary filmmaker Renée Scheltema has tackled in her latest production. In telling this story, Scheltema delivers her message directly and to the point but does so without resorting to hysterical scare tactics. Instead, she lays out her arguments in a reasoned manner, with a deftly mixed combination of statistics and opinions from experts in a variety of pertinent disciplines. More importantly, though, the film goes beyond just presenting the problem by showcasing a host of practical solutions that can be drawn upon to counter this issue. Most of the suggestions involve questions of sustainability, showing us highly pragmatic (and often surprisingly simple) means for helping to slow, and possibly reverse, current trends.

What’s most intriguing about this film, though, is its take on what really needs to be done to address these issues. And that, surprisingly enough, has more to do with human nature than it does with developing and deploying new technology. To be sure, the practical measures the director outlines are undoubtedly important, but the underlying reason behind how we’ve gotten to where we are has more to do with our outlooks and attitudes. That’s especially true in how we view the nature of our reality and the beliefs we’ve embraced about it, for they have come to shape our behavior in myriad ways, from economic policies to interpersonal relations to even our spiritual views. In many ways, one could say that the climate change and related effects we’re experiencing are, at their heart, merely symptoms of these more fundamental considerations, outgrowths of the basic assumptions about life and our world that have produced them. So, if we’re to get to the real cause of these problems, we need to look underneath – and to ourselves – to find meaningful solutions while we still have time.

This is fundamental to our employment of the conscious creation process, the philosophy that maintains we manifest the reality we experience through the power of our thoughts, beliefs and intents. The ideas we embrace, the philosophy maintains, ultimately become expressed as physical materializations. So, if we embrace beliefs about throwaway lifestyles, for example, sooner or later that disposability aspect of our mindset will become reflected in the world itself, evidenced by such phenomena as environmental degradation, the death of native wildlife, and the disappearance of plant and animal species. What’s more troubling, though, is that we may not be immune from such effects. Their impact could well boomerang on us, perhaps even leading to us becoming the latest casualty of species extinction.

Do we really want such an outcome just for the sake of a little convenience? Most of us would probably say no. But, if that’s truly the case, then it’s time to go back and reassess our beliefs about the type of lifestyle we want to embrace.

But this is not the only attitude shift that needs to take place. A number of other changes need to occur, too, such as seeking to build a society based more on cooperation than competition and implementing economic policies that promote a more equitable world. Ridding ourselves of outmoded notions and myths that simply aren’t true – like having more stuff automatically equates to greater happiness and fulfillment – is also essential. If we don’t make such changes, we could all pay dearly.

To make this happen, though, we must again start with our beliefs, analyzing them in all the areas of relevance and importance. Drawing upon the principles of conscious creation could prove quite useful. And, for some additional metaphysical tips, we might also consider screening the director’s previous film, “Something Unknown Is Doing We Don’t Know What” (2009), which examines a variety of tools and techniques that we might want to tap to help reshape our outlooks – and our world.

“Normal Is Over” is currently playing primarily at special screenings and film festivals (for information about dates and locations, as well as how to set up a screening, visit the documentary’s web site).This offering is quite obviously a labor of love for the filmmaker, both in terms of imparting its practical information and as an expression of the director’s personal feelings, experiences and sensibilities. Viewers can sense both of these qualities as they screen the film, a quality that helps to get its message across at both the collective and individual levels. This heightens the impact while delivering useful ideas at the same time. In this sense, “Normal Is Over” shows us what it could mean to change our world – for the better. However, we must act while we still have time – and an opportunity to make it happen.