‘The Innocents’ contemplates faith and the mystery of creation

It’s been said the Lord works in mysterious ways. In fact, in some cases, those mysteries are so cryptic that it’s difficult to fathom what could possibly be behind them. That’s where one’s faith can be seriously tested, as a group of Polish nuns discover for themselves in the days shortly after World War II in the gripping historical drama, “The Innocents,” now available on DVD, Blu-ray disk and video on demand.

In December 1945, the sisters of a Benedictine convent near Warsaw are perplexed when they begin falling ill in severe pain. However, true to form, the strict Rev. Mother (Agata Kulesza) wants to address the matter internally, keeping outsiders at bay. But, recognizing that the sisters are ill-equipped to handle the situation, Sister Maria (Agata Buzek), a member of the order who frequently gets into trouble for taking matters into her own hands, seeks medical help. She sneaks out of the convent and asks some of the local street kids to help her find a doctor. They lead her to a field hospital run by the French Red Cross, which is on a mission to treat the last of its country’s survivors from the German concentration camps in Poland. Though initially told to seek help from local medical practitioners, Maria pleads her case to Dr. Mathilde Beaulieu (Lou de Laâge), who reluctantly agrees to pay a visit to the convent.

Upon examining the sisters, Mathilde makes a shocking discovery – the “ill” nuns are actually pregnant and about to give birth. During the Soviet liberation of Poland months earlier, the convent was apparently overrun by Russian troops who raped the inhabitants. The sisters tried to disavow what happened, hoping to put it out of their memories, especially since many believed they were being unfaithful to their vows. But, try as they might to ignore what happened, those acts of savagery are about to come to fruition.

Needless to say, Mathilde is shocked at her discovery, but, as a medical professional (and a religious non-believer), she keeps a level head, treating the sisters as she would any other patient. She does her best to deal with the situation in practical terms, which isn’t always easy, given that it violates her obligations to the French Red Cross. At the same time, the sisters don’t see things quite so pragmatically, making Mathilde’s efforts even more difficult. Many view their circumstances with shame and are reluctant to be examined, despite their physical agony and even though what happened to them was not their fault. The Rev. Mother is particularly anxious to keep matters hushed up, fearing what others might think and concerned that she and her flock have irretrievably violated the sanctity of their commitment. It’s a difficult scenario for all concerned. 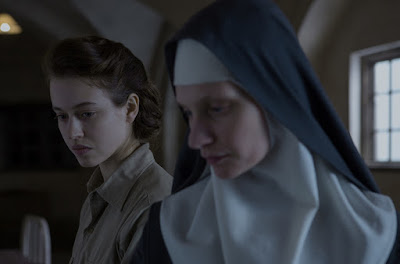 As the story unfolds, the sisters wonder how their God could have allowed such an atrocity to happen. Meanwhile, Mathilde questions her professional obligations, too, especially given the flak she draws from her unit’s commanding officer (Pascal Elso) and one of her trusted colleagues (Vincent Macaigne) when it becomes apparent what she’s doing. Mathilde also must ask herself if she wants to continue with this mission of mercy when she has her own troubling encounter with Russian troops at a checkpoint located between the convent and the field hospital. But, as events play out, a purpose for it all is eventually revealed – and a miraculous one at that. It’s circumstances like this that truly test one’s faith – and show what it means to have it in the first place.

In light of the foregoing, it’s not out of bounds for even the reasonable-minded among us to question how such events can transpire. But, for those who understand the mechanics of the conscious creation process, the means by which we manifest the reality we experience through the power of our thoughts, beliefs and intents, such incidents are within the realm of possibility. The trick is grasping why.

In the materialization of some manifestations, the path to an outcome may take some very strange and unexpected twists and turns, many of which may defy logic. But, given that our beliefs are governed by more than just intellect and reason, including less “rational” qualities like faith and intuition, the route they take us in reaching the ultimate destination may be full of detours and apparent left turns, even though they prove indispensible in getting us to where we’re meant to be. In fact, it’s under circumstances like this when the faith component is particularly crucial, even if we don’t understand the meaning or purpose of the specific elements that determine our course.

For those who are committed to a life of contemplation and introspection, such as the sisters of this convent, it might be easy to tune out, or even become detached from, the conditions of the real world. When we allow our thoughts and beliefs to become preoccupied with the loftier issues of life, we might become unconcerned with, perhaps even unaware of, the everyday considerations that the majority of us deal with. For some of us, spending our days musing about life’s noble issues might be enough. But, as individuals who have chosen to experience life in physical reality with everything that entails, the unfettered pursuit of such a purely reflective existence may not be enough. Some of us might need a more tangible connection to our chosen physical existence. 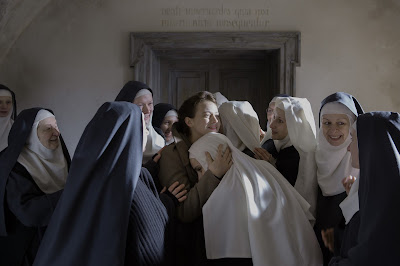 Determining the nature of that connection could be rather obvious to some of us. But, in other cases, we may lack the direction necessary to find a purpose. We might have a vague sense of a need to fulfill some kind of tangible calling even though its particulars are undefined. If we put forth an intent to help us achieve such a goal, even if we don’t fully understand it or what it involves, we may well see results commensurate with that idea come flooding back to us, especially if we have faith that the outcome will be realized.

Of course, in scenarios like this, when we put forth such altruistic but nebulous intents, the events that emerge from them may take puzzling forms that leave us perplexed, perhaps even appalled. This can cause us to question our beliefs, as well as our faith, maybe even prompting us to go back on our originally stated intents. However, if we understand that such materializations are all part of the plan, that they’re integral to helping us reach our goal, no matter how incongruent or bizarre they may seem, we’ll realize later how such seeming anomalies led to the fulfillment of our objective.

So why does our divine collaborator take us down such unexpected paths? As our partner in this process, God (or the Universe or whatever other word best suits you) knows the best way to fulfill our stated intent, even if it doesn’t always seem that way. However, when we reach our goal, we often look back with an entirely different perspective; the so-called “silver lining” and “blessing on disguise” metaphors are highly apropos in such circumstances. These kinds of outcomes, in turn, often serve to reinforce the depth of our faith in the process and in our divine collaborator.

Knowing that, then, it would probably be in our best interests to abide by such thinking up front. By doing so, we might be able to avoid much of the anguish that arises when seemingly unexpected manifestations appear along the path to reaching our ultimate goal. Admittedly, this may not be easy, but, if we adjust our mindset accordingly, we might be surprised at how much more easily matters seem to progress. The result would be less stress, more trust in the process and greater fulfillment in the outcome. We would come to appreciate the wisdom of the notion that the Lord works in mysterious ways – and we’d be okay with it, too, just as the sisters discover for themselves at film’s end. 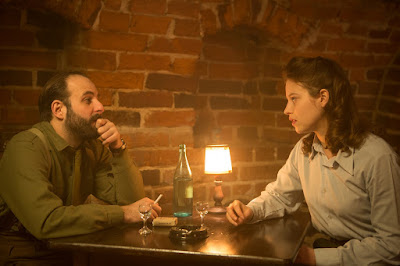 “The Innocents” captivates from start to finish. Director Anne Fontaine has crafted a gripping drama featuring superb performances, gorgeous cinematography and an ethereal soundtrack, all of which suit the picture well, lending an otherworldly quality to this fact-based saga. Viewers will no doubt wonder how it will ultimately play out, a fitting tribute for a film that has the question of faith at its very heart.

Sometimes our lives may appear as though they’re unfolding at random. However, if we look to our beliefs and the intents we put forth, we might find that there are definite purposes and directions to them, even if they don’t superficially make sense. The rewards that come from abiding by such notions may fill us with satisfaction beyond imagination. And, in the end, all it takes is a little faith.

Posted by Brent Marchant at 3:26 AM