Passionately following one’s dreams, no matter what the cost, is a noble endeavor, to be sure. Pursuing what gives us joy is truly an undertaking to which we should all aspire. But what if the pursuit of that goal has the potential for public humiliation – should we continue under such circumstances? What’s more, what if others deliberately shield us from such criticism – are they really doing us any favors, even if they seem to have our best interests at heart? Those are some mighty big life lessons, and they’re among the issues raised and addressed in the bittersweet new biopic, “Florence Foster Jenkins.”

Wealthy socialite and arts patron Florence Foster Jenkins (Meryl Streep) generously supports the cultural scene in 1940s New York, doting over the music club she founded and frequently organizing salon recitals for her wealthy friends. She’s also eager to offer financial assistance to those whom she considers her peers, like famed, though sometimes fiscally strapped, conductor Arturo Toscanini (John Kavanagh). And, with the aid of her loving husband and onetime aspiring Shakespearean actor, St. Clair Bayfield (Hugh Grant), Florence relishes her little soirees. But what gives her the greatest pleasure is performing her own renditions of the pieces she loves. There’s just one problem – she can’t hit a right note to save her life.

Arguably the worst vocalist ever to grace the stage, Florence “sings” with such blatantly off-key coloring that it would make even the most tone-deaf among us cringe. But, somehow, most everyone overlooks or doesn’t seem to notice the shrill nature of her shrieking, thanks in large part to St. Clair’s efforts to protect his beloved from the ravages of those who would criticize her, such as New York’s fickle newspaper columnists. She’s also fawned over by others like her vocal coach (David Haig), who’ll gladly tell Florence she’s a virtuoso as long as she pays him his pricey lesson fees. And, if anyone dares raise an eyebrow, such as Florence’s new classically trained accompanist, Cosmé McMoon (Simon Helberg), St. Clair is quick to pounce, putting out the fires before they ever have a chance to smolder.

So why does everyone put up such a façade over Florence’s woeful crooning? For starters, as already noted, she’s an exceedingly generous patron, and money speaks volumes with financially challenged artists. Then there’s her unflappable enthusiasm for her art; she’s so passionate about performing that no one is anxious to discourage her, no matter how ear-splitting her screeching may be. But, above all, no one has the heart to deflate the spirits of a dying woman; as a syphilis patient in the last stages (an illness she contracted from her now-deceased first husband), Florence’s health is fragile and fading fast, so who would be so cruel as to deny someone her passion with the clock quickly winding down?

Still, the question remains, is anyone doing Florence any favor by being so overprotective? Are they really sparing her feelings? What would happen to her if the truth were to ever come out? Could she handle such a rude awakening? Those questions get called when Florence takes it upon herself to make a record as a Christmas gift for her music club friends. But what would happen if someone outside the club got hold of a copy, such as a radio show host? If that weren’t problematic enough, though, the calamity potential looms even larger with a subsequent development. While St. Clair is away for a weekend with his mistress, Kathleen (Rebecca Ferguson), Florence books a date for a solo recital at Carnegie Hall, primarily as a benefit for American servicemen. These challenges are bigger than anything St. Clair has previously tried to contain, and the risk of the truth coming out – and its potentially devastating effects – hover like a storm cloud sure to unleash an uncontrollable downpour. 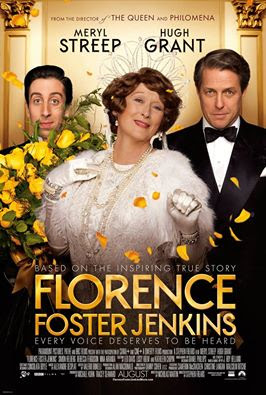 As this film illustrates, honesty is trickier to manage than one might think, despite it generally being considered the best policy. No matter how much we might try to finesse the truth, there are bound to be consequences – perhaps even collateral damage – associated with such efforts. It’s at times like this when we must search our souls to determine what course of action truly is best, regardless of how painful it may be. And the best starting point is our beliefs, the cornerstone of the conscious creation process, the means by which we manifest the reality we experience.

Given the particulars of this scenario, of course, one can’t help but ask why the principals have manifested what they have. Obviously their reasons are their own. But, in the pursuit of learning particular life lessons, all options are on the table through conscious creation, no matter how dubious some of them might seem, as Florence’s experience clearly illustrates.

If one were to speculate about the reasoning behind the protagonist’s creations, several possibilities emerge. For example, Florence’s love of music and her pursuit of it for its own sake appear to provide her with sufficient motivation to bring these passions to life through the power of her beliefs. These are certainly laudable ambitions, too, regardless of how adept (or inept) she might be at materializing them. Such unabashed gumption is something we can all learn from, especially if we unduly hold ourselves back from living out our dreams.

At the same time, though, it’s possible that Florence has also sought to experience other, more problematic life lessons, such as the prospects of ridicule, humiliation, willful denial and being kept in the dark. One might wonder what possible value there is in these kinds of unpalatable experiences, but, as souls who are continually evolving, who ultimately seek to engage in the full range of physical existence, everything is fair game, potential calamities included. If, indeed, such experiences are part of Florence’s metaphysical agenda, then their manifestation is certain to occur in one form or another.

Meanwhile, those who share in these co-creations with Florence afford themselves an opportunity for life lessons of their own. For instance, given the fiercely protective nature of St. Clair’s and Cosmé’s actions, they have access to circumstances to teach them (and those around them) the merits of compassion. In an age when so many of us are quick to criticize, Florence’s backers provide us with a fine example of what it means to nurture our support for others – and to cut them some much-needed slack.

In various ways, these manifestations embody several key principles that characterize the conscious creation process. Most notably they illustrate how to push through limitations, knocking down barriers that many may see as insurmountable. At the same time, they also demonstrate the value of overcoming fears and living courageously, despite the odds. In that regard, Florence shows us the way, as do her most ardent supporters. And these may be among biggest and most important life lessons depicted in this film.

If the narrative of this picture sounds familiar, it’s because Florence’s biography provided the basis of the plot of the fictional French production “Marguerite”, which came out in limited release earlier this year. There are a number of similarities between the two films, but there are enough differences to distinguish them as well. A number of elements, such as Florence’s numerous eccentricities (like her inordinately ravenous appetite for potato salad and her penchant for perpetually toting a well-worn leather briefcase whose contents are a mystery), are present here, despite their exclusion in the film’s fictional counterpart. In terms of similarities, both pictures feature the protagonists’ off-key vocalizations as centerpiece elements, but, despite their prevalence in each production, they’re so effectively done that they never grow tiresome in either case.

The stellar performances of Grant, Helberg and, especially, Streep (a virtually guaranteed Oscar nominee) definitely make this film, elevating its sometimes-unfocused screenplay and imbuing it more spit and polish than it might have had in lesser hands. The main problem with the script is that it occasionally has trouble striking the right balance between comedy and drama, never quite finding the right mix of when it’s acceptable to laugh at Florence and when to feel sorry for her. The film certainly hits the right notes in its lavish period piece production values and its hilarious “musical numbers,” and director Stephen Frears does his best to make it all work, but the pacing and writing never quite even out as effectively as they could. Enjoy this one for the performances but don’t be disappointed if it doesn’t quite live up to expectations.

Life’s lessons take myriad forms, both pleasant and devastating. They all ultimately make up who we are, both as physical beings on the earthly plane and as enlightened entities on the soul level. How we gain those experiences is up to us, thanks to what the conscious creation process makes possible, but, in the end, they all play a part in furthering our metaphysical education and spiritual evolution. To that end, then, we would be wise to welcome, even relish, those experiences for what they’re worth, no matter how uplifting or disappointing they may be in the creation of the works of art that are each of us.

Posted by Brent Marchant at 4:02 AM